[Infographic] Telemedicine : the state of play in France 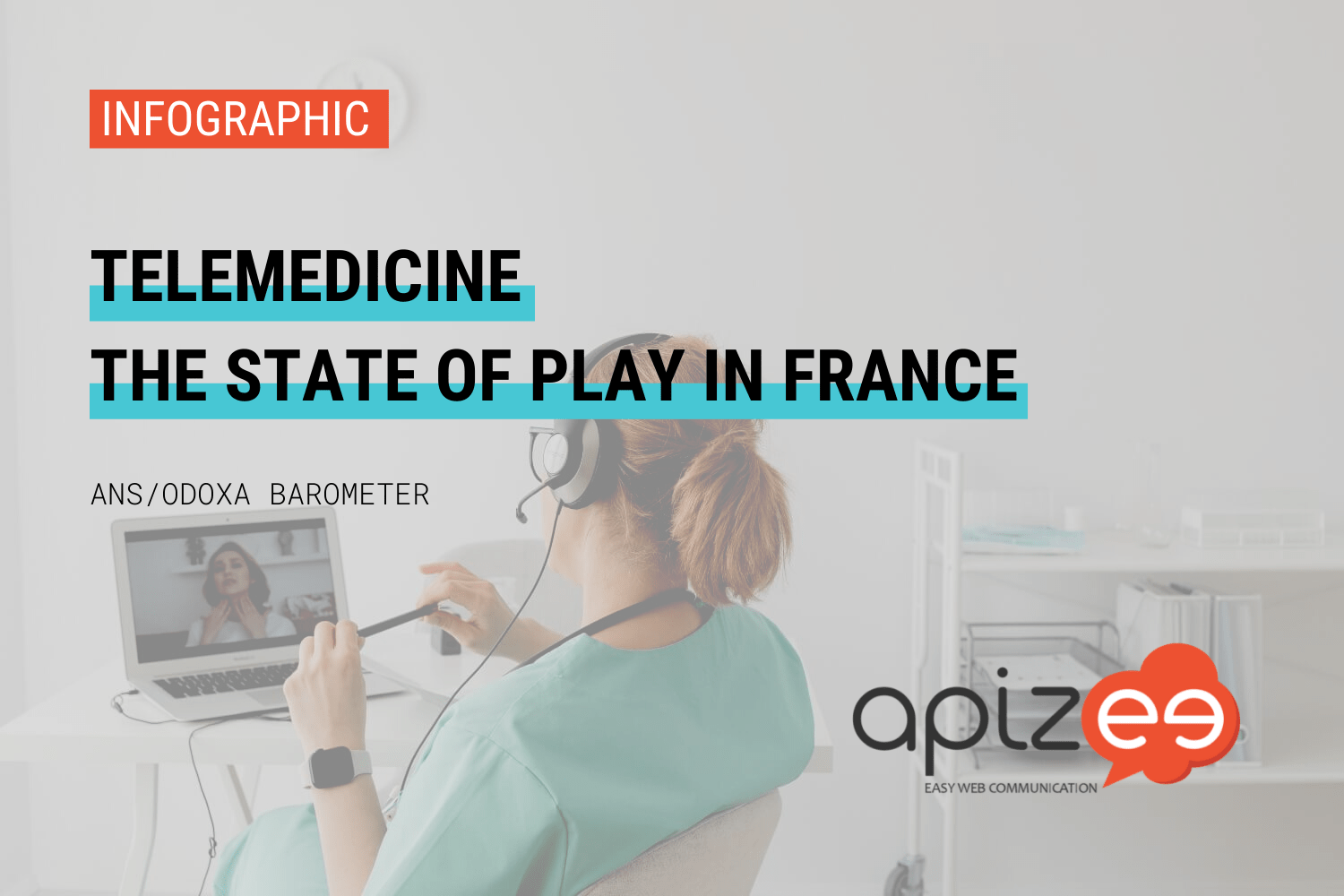 [Infographic] Telemedicine : the state of play in France

After a timid start in France, telemedicine experienced a considerable boom in 2020 with the Covid-19 health crisis. A new type of medical consultation which attracts more and more French people, but also raises questions in France. This is why the “Agence du Numérique en Santé” (ANS) in partnership with Odoxa has decided to carry out 3 barometers between the end of 2019 and the end of 2020 to assess the point of view of the French population on various aspects of telemedicine.

Methodology of the study

Three surveys were thus carried out on a sample of around 2,000 to 3,000 French people and around 500 healthcare professionals.

1/ French people’s knowledge on the different dimensions of telemedicine

Carried out in November 2019, the first study showed that the various telemedicine procedures were already well known by the French. In fact, during this period, 79% of respondents knew about telemedicine and 82% about teleconsultation. On the other hand, tele-expertise, medical telesurveillance and tele-care are concepts that are less well-known in France. With confinement, knowledge in telemedicine has largely progressed and the French are increasingly mastering these concepts. In November 2020, a year later, 86% of French people knew what telemedicine was and 92% what teleconsultation was. Regarding the other dimensions, they were still less well known since 54% knew what tele-expertise was, 64% medical telesurveillance and 40% tele-care.

Another important aspect: knowledge in terms of price and reimbursement of teleconsultations. This has improved over time, since in November 2019, 74% of French people knew that teleconsultation acts were reimbursed by Health Insurance against 84% in June 2020 and 92% in November 2020. The study shows a progression of 18 points in just one year. We also observe this phenomenon on the knowledge of the price of a teleconsultation compared to a classic consultation. From now on, 78% of French people know it is the same price, an increase of 22 points over one year.

At the end of 2019, the French already had a good understanding of telemedicine and its different dimensions, whether in terms of use, operation, or price. The health crisis as well as the implementation of the first confinement have upset the habits of the French and have thus contributed to improving their knowledge in the matter.

2/ Perception and general opinion of the French on telemedicine

If telemedicine is well perceived by the French, it has both positive and negative points. Among the positive aspects given by the French respondents are:

On the negative side, the study identifies:

After one year, the positive points have progressed and now outweigh the negatives ones. However, the negative points should not be overlooked since the risk of dehumanizing the relationship is the main reason given by the French who refuse teleconsultation.

3/ Use of telemedicine in France

In November 2020, nearly one in two French people (48%) wanted to use telemedicine.

In fact, the practice of telemedicine has exploded in a year. At the end of 2019, only 6% of French people had experimented teleconsultation compared to 18% in June 2020, i.e., a threefold increase in just six months. However, the study reveals a declain in progression after the first confinement (only +2 points since June). France is thus “behind” compared to other European countries such as Spain (55%) or the United Kingdom (42%).

Regarding the types of teleconsultations, the study highlights a top 5 of the most suitable reasons according to the French:

Telemedicine is developing slowly in France, but it still seems to be becoming part of the habits of physicians and patients. In general, the French think that teleconsultation is useful for managing simple, repetitive or administrative situations.

4/ Level of satisfaction of the French towards telemedicine

In France, 88% of people who have experimented teleconsultation are satisfied, including 39% “very satisfied”. In one year, we have seen an increase in the satisfaction of the French by 17 points. France is the second most satisfied country in Europe in terms of telemedicine.

The reasons for satisfaction relate on the one hand to the notion of necessity since teleconsultation was one of the only means of obtaining a consultation during confinement and on the other hand on the technical level, in other words, the proper functioning of the tools and the quality of the internet connection. In addition, 14% of respondents indicated that they were satisfied because they were comfortable and that the teleconsultation was similar to a face-to-face consultation.

5/ Prospects for the development of telemedicine

Finally, the study reveals that physicians have a role to play in the uptake of telemedicine by patients and in the future development of teleconsultation. In fact, 70% of French people say that they would follow the advice of their doctor if they offered them a teleconsultation.

France still has some cards to play to encourage the adoption of telemedicine by the French. First, we must consider dissatisfaction and work on optimizing tools for both physicians and patients. Secondly, public authorities as well as health professionals must communicate with the French on the functioning and use of telemedicine. Finally, for the French, it is essential to reassure them about data security and for doctors, to equip themselves with secure and efficient tools.

At Apizee, we help health facilities, mutual insurance companies, businesses and health or occupational medicine structures to set up simple and secure telemedicine solutions. Depending on the needs, we can offer a French turnkey solution or as an API to integrate and whose data is hosted in France.